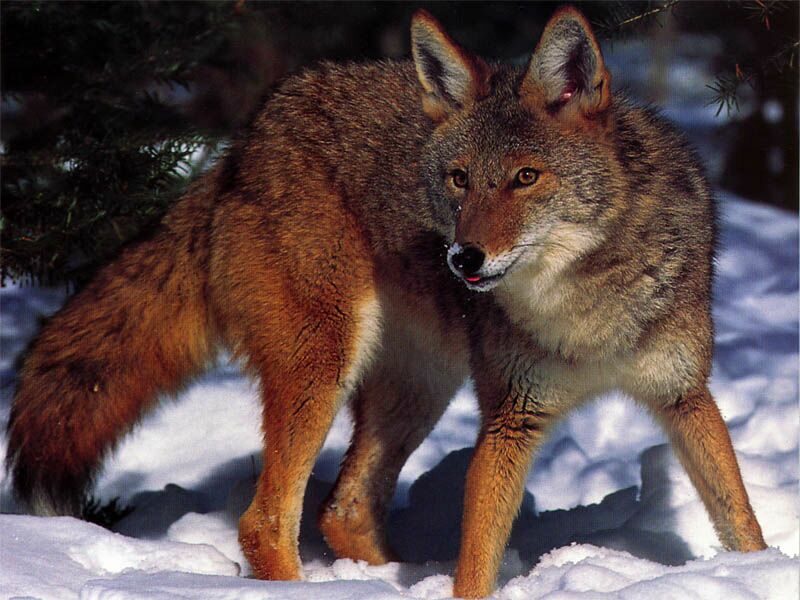 I met the Coyote for the second time in the parking lot of a play house in Santa Fe New Mexico. At the time I didn’t know Adan was part Native American and a member of his tribe’s Coyote clan – I just knew he was a little different. Stocky with a broad face that hid no feelings, he had an unavoidable intensity.
Stagehand was one of the many job titles I held when I was young. I was standing outside the playhouse where I worked on a smoke break, waiting for the actors to show up for a new production when I first met him. Adan seemed more comfortable with blue collar workers than the actors arriving from LA.

One of them drove up in a really nice Cadillac. It was an old model, a true land yacht, deep blue and newly waxed. The driver had an arm crooked out the window and the peaceful look of one who knew he was king of all he surveyed. Adan picked up a golf ball sized rock and approached his window while he parked.

“Up or down?”
“What?” The actor was confused and little shaken as he looked up at the slightly crazed grinning man standing a foot away from his car.
“I’m going to throw this rock at you. You can roll up your window and I’ll crack the glass and not hurt you, or you can leave the window down and I’ll hit you.” Adan explained this simple math as if it was the most natural thing in the world.
“Up or down?”

The actor sputtered and tried to come up with a third alternative to the proposition, unfortunately Adan wasn’t in a mood to wait. He threw the rock hard through the window hitting him on the shoulder. “Ow! God Dammit!” An argument ensued but did not come to blows. Adan laughed – he obviously enjoyed teaching the prideful gringo a lesson in priorities. That was my first glimpse of his trickster side.

New Mexico was my next stop after college. I’d always wanted to live in the Southwest and I hoped to find more clues to my own attraction to animal spirits in the Native American Culture there. Wandering the shops stacked with endless busts of Sitting Bull did not inspire any deeper wisdom, nor did any of the New Age groups floating around there back then. The Native American and Latino cultures were distant from me and often (understandably) hostile to white seekers like me. It was only when Adan took me aside during breaks and shared with me some of the tradition he’d learned that I was given some indigenous based insight into what I’d been experiencing.

By then the dreams and visitations had significantly calmed down – I was grateful for the respite. I felt more whole and inspired, my work with Amy had just begun. It was as if grounding rods had been inserted into the soil around me. I think Adan sensed I was standing between the terrains of being lost and found. I learned later that he went on to shepherd troubled kids using his theater training before dying a few years ago. He had an instinctive street-wise compassion.

Like other poor Tex Mex kids Adan grew up with, he escaped poverty by joining the military. He wound up in the Special Forces, doing things he wasn’t proud of and didn’t like to talk about. He didn’t discover his Native American roots until he was an adult watching a dance at a Pow Wow.

“I started feeling funny and then one of the dancers came up to me and took my hands. ‘Come join us. You belong here, you’re one of us.’ After that I started asking around and learned we had Indian in our blood. Its not something families liked to talk about.”

It sounded like his new connection to Native culture helped him deal with life after the military. It gave him a sense of wholeness he’d never had before. Eventually he married with the intention of settling down. “Then she died suddenly and I went a little crazy.

“I woke up in a phone booth three days after the funeral with no shirt and blood on me. I never found out what happened.” His parents helped him recover from her loss.

“That’s when the Coyote dreams started, followed by visitations.”

“I went to the medicine man of my tribe. He interpreted the dreams and said I was being called to the Coyote clan. There are dreams and real world visitation that make you a part of the clan. I had all the dreams and visitations. I survived the last visitation – not everybody does. All of the animal clans have their own particular initiations.”

Adan went on to work with his clan and discover more about his traditions, though wouldn’t share much with me out of respect for his new found community. After telling him about my bear dreams he said he’d ask the medicine man of his tribe. “He doesn’t speak to white people. He just calls you ‘Wasichu’ and spits in the dirt.” He was very careful to ask about all the details of the dream, exactly where the bear nuzzled me and when in the dream it happened.

A few weeks later he took me aside. “He doesn’t believe you’re white with dreams like that. He says the bear is calling out to you.” By that time I had two physical confrontations with bears while camping. They were both dangerous, but probably not life threatening as they were brown not black bears.

“You’ll have one more confrontation. It may not happen in this life at all – its not something you can prepare for or worry about. The spirits just take care of it.”

Adan believed the bear would eventually confront me, how I responded would determine whether or not I was fit to be a member of its clan. It sounded like it would also determine whether or not I was alive. He didn’t seem to think I had to have native blood to receive these visions. As far I know I’m mostly Irish, with a little Euro-mutt thrown in.

Later in the month he took me aside and gave me a medicine bag with a small white bear in it.

“Keep this in the bag and feed it every once in a while. Tobacco and crushed turquoise. When you need its power take the fetish out and hold its nose up to yours. Breath its power in. Don’t show it to anyone and take good care of it.”

He also gave me a hand translated version of the Beauty Way prayer.

“I’ve never seen this verse of it before, he gave me some parts I’d never heard of before.” The medicine man had done a ceremony on my behalf. He wanted me to read the prayer daily.

“He kept saying ‘this we do for our Indian brother’ I kept whispering ‘Irish’. He got pretty mad at me.”

During our brief friendship Adan took me under his wing, trying to help me to understand what I’d been going through. Core Shamanism and Amy’s healing addressed some of what I was going through but certainly not everything. Ancient Shamanism in the modern world is still new terrain. Never before has a culture so psychically cut off from the natural world attempted to unearth an authentic native shamanism within itself. There was a lot going on in my life that fell outside of what Core Shamanism was offering me then. Societies within a tribe based on animal spirits are not universal principles in shamanism. We may all have animal teachers and protectors who show up in different ways and at different times in our lives. Close, personal affiliations with particular spirits, as in Adan’s case, that function as a foundation for the life a community, are not something Core Shamanism focuses on.

Looking back Adan was a person who had come through his own dismemberment alive and more whole than when he started. Life and the spirits were not always kind to him. He had been psychically torn limb from limb. The Coyotes medicine ran thickly through his blood. He saw the shaky legs I stood upon. He knew how rough these things could be. He was theAnam Cara or “Soul Friend” the Irish talk about. Compassion without pity and the wisdom of one who walked before me – I never knew a Coyote could be such a blessing.

Coyote had once again joined me on my path, confirming that I was moving in the right direction. Though intense and chaotic the energy showed up in my life to let me know that the spirit world and this world were in fact not separate, but one. The Coyote was my teacher in crossing the terrain between this reality and the spirit world.

After a few years I moved on from New Mexico, sick family called me back to the Bay Area. I continued to visit Amy for healing over the next few years, receiving soul retrievals and getting answers to questions only one who journeys can answer. I was still not strong enough to care for myself. My work as a Stage Hand would be the last steady income I saw for years. The cumulative affect of all the healing was beginning to catch up to me. Somehow I knew how to receive and integrate all of the Soul Pieces I was being given, but I had to do so in dreams. I entered a period where I needed to sleep for up to twenty hours a day for weeks at a time. Thankfully Anam Cara’s continued showing up in my life, helping me to survive the gift of healing.

– back to introduction – previous chapter: Writing As Re-membering – next chapter: Chop Wood Walk Through Darkness

One thought on “Stepping Over The Edge: Coyote Friend”