Seals still talked to people as recently as two hundred years ago, according to some of the Celtic folk David Thompson knew. His book “The People of the Sea” is filled with stories of the Selkie, Seals and their magical relations with the people of Scotland and Ireland.
Many peoples recount histories in which animals and humans were able to talk to each other. The Ojibwe believed the loss of communication was the fault of the animals. I think its fairly common to pin the blame on them. After all, we’re not talking to the animals so they really can’t disagree! Such myths are often connected to a utopian time. Somehow the peace is lost along with a common language, and the exodus from Eden begins.

Core Shamanism gives us a new lens to view myths and folks tales. After spending time with the compassionate helping spirits its not easy to dismiss mythology as quaint stories. Legends are maps to worlds filled with healing and extraordinary experiences. They are messages from the spirits to the whole of humanity.
I know from my own experiences journeying in those worlds that the animals have not stopped talking to us. If what the sprits say is true, they are talking to us now more than ever. Its really about learning new ways of listening.
The Celts were able to hear the voice of the Seals only a few centuries ago because the spirit world was not so far from their daily lives. Like shaman who can see with their “strong eye”, the Celts knew how to listen with hearing that was receptive to the spirits. They could not help but hear the true voices of the Seals.
I spent a year learning to hear the Oran Mor, the great song of the universe. Over time the trees taught me to open my heart in order to hear. I stood at dawn in a grove of Oaks, day after day, growing quieter, allowing myself to become more receptive to the Green World while still in ordinary consciousness. The voices of the trees grew louder, along with the creatures that lived there. I was able to erase some language barrier through sincere patient persistence.
I was also able to hear the quieter messages in my son’s voice, who is still learning to communicate. I read more in the eyes and tail wags of my dog. I was surprised by the unintended sternness in my voice when tempers rose in our house. When we can understand the language of the plants and animals we begin to understand our own hearts. We step back into the community of life to which everything belongs. Language is after all, a collaborative process.
I think the real secret to learning to talk with the Seals again lies in losing a certain kind of fear. If we were able to understand the Seals wouldn’t all of the voices of the world become clear to us? Wouldn’t the sound of the Oran Mor penetrate us so deeply our lives would be forever changed? We may fear that the ecstatic symphony of life is too much for our hearts to hold. Who would we be if we allowed ourselves to understand what the world is saying to us? 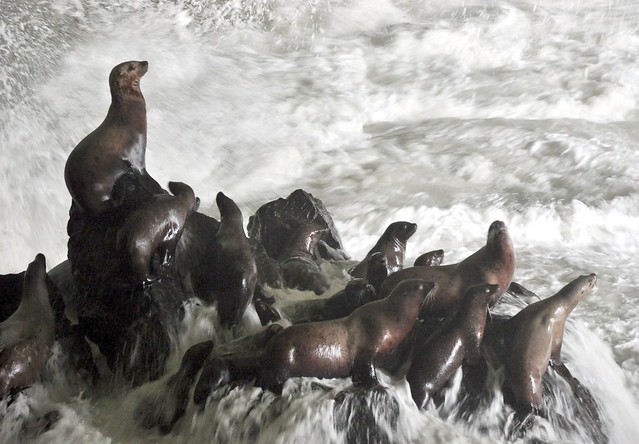