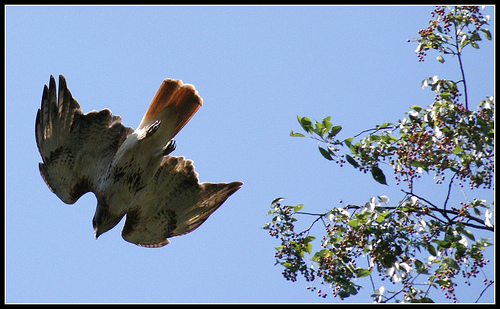 Have you ever had one of those ungainly flying dreams? You know, the ones where you can fly, but as soon as you try to take charge everything falls apart. Sometimes the power of flight is erratic, too difficult to control, other times it just dissipates like fog in the sun.

The other night I surpassed that stage of flight. After a great dream spent soaring with friends, I was given a bare broomstick to practice levitation. Sort of a bike with training wheels for those who fly on brooms, I learned to float just a few feet above the ground. I was told to get my own broomstick and “practice practice practice!”

Yesterday I went up into the woods with the singular intention of finding my broomstick. I didn’t have to go too far until I found a perfect specimen. It lay there, apparently it was waiting for me for some time. Stout, not too long, it was just the perfect size for a beginner.

I think I wanted to fly when I first started taking dance classes as a child. I saw Fred Astaire on TV, he danced and glowed, a golden beacon in my stressful life. I did learn to fly through dance for a time, until I broke my wings (Osgood Schlatters disease).

Dancers hold a sacred knowledge, kinesthetic magic born of practiced, sustained flight. We can see between the worlds, understand that the intangible ecstasies of life are as as material as anything else, all it takes is a LOT of hard work to access them at will. Astaire was a master of that knowledge, he used it to communicate his bliss to the world.

Of course I had to see what it would be like to journey on my new broom. Sitting atop its straw-less back, I turned on some drumming music and closed my eyes. The broom felt light and glowing beneath me. It focused my energy, added a masculine strength to my intent.

Some Neo-Pagans believe the broom is a symbol of balanced masculine and feminine energy, the staff being the male and the straw brush end being female. Brooms are also thought to have been power objects in disguise. As Christianity worked to erase the indigenous traditions of the Celts, practices we would think of as shamanic went into hiding. A broom is a wand, an axis-mundi, a staff of power, a gateway to the world of spirit, and of course a really useful thing when you’re cleaning up.

I started by listening, by feeling the trees and the wind through them. A branch thats moved with the wind must know how to fly, must have the power of flight within it. I let myself be carried, lifted by the wind, rather than ‘trying’ to fly.

Aikido fell apart for me as well, I’d become too dependent on a single teacher. When my knees had recovered in my twenties, I sought flight there. After years of devoted training, years of learning to fly, it all fell apart when he went away. I tried to continue afterwards, picking it up again here and there, but it was never the same. Even meditation stopped working for me. I can blame myself, or life, or just see it was another wave passing through me.

My late father greeted me in the lower world, showing me how to use the broom to focus my intention and speed along past the horizon. Holding tight in both ordinary and non-ordinary reality I found myself in two places at once, physically present in both worlds. This is a kind of state-of-power in shamanism, to be fully present in two places at once.

Eventually I came to settle on some new terrain in the lower world. I’m not sure if this is what the spirits in my dream had intended but – WOW WHAT A RIDE! The broomstick felt natural as a way to focus intent. It also had a power all of its own, its resonance informed my journey. Not bad for a beginner.

Life seems to offer me new ways to fly every ten years or so, each method has its own lessons. I’m learning not to get too comfortable, not to hold on too tight (except of course to the handle of my broom). Flight of the spirit is never a science, always an art. It requires a willingness to jump with great hope, but no expectation.