How often are we open to messages life gives us? In our cities, malls, suburbs, where the wildness of the world has been banished, have we also silenced the voices that might awaken our souls? Perhaps that world was too rough for us, to true in what it demanded in exchange for an experience of the sacredness of this life.

I was wide awake at the wheel when the Elk danced into my headlights. He was big, just under 300 lbs from the sheriffs report. I moved to the right to avoid, he dance to the right, I moved back, he jumped back. At 2am that night the road was deadly black, the ice of winter still clinging to the shoulders. High Utah mountain passages like that keep winters chill for months, even if the deserts below heat up over 100 degrees. 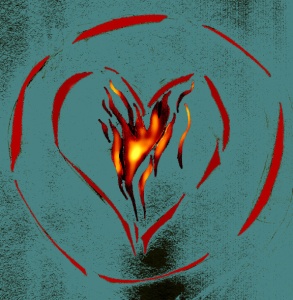 We collided at 60mph, his big black eye a few inches from mine as his shoulder connected with the left edge of the windshield. Had we hit head on the Honda Civic would have swept his legs, delivering his body directly to the chests of me and my passenger, probably killing us both. He might have lived, staggered away, if a semi coming the other direction had not hit him head on. I saw only a blur.

I had to see what happened to him. It was crazy I know, I was still shaking from the impact. 18 wheelers carrying stone and ore were coming around a tight turn and onto the icy straightaway with little time to notice something in the road smaller than another truck, much less swerve to avoid. We were all boxed in, two lanes, berms on either side. I had to be nimble or wind up on someone’s grill. I pulled over, tumbled out and steadied myself on the crushed left front end of my friends car before running across the road and heading down to where the body lay. I remember feeling like I was running on the dark side of the moon, so desolate, steps in slow motion.

He looked pristine, as if he were just laying down for a rest. Not a drop of blood on his fur as the light of passing trucks ignited the scene. Then I saw something in the road. I pulled out my camping flashlight and focused on – his heart, laying on the blacktop only a few feet away. The impact of the truck had blown his heart clean out of his chest. It looked like a completely different being, so small and vulnerable but with a presence that changed the entire landscape.

How can this moment ever be? How can something like this happen anywhere, ever?

I was in my twenties when that happened. I was just reaching out to my fledgling spirituality, often grasping at straws, looking for answers anywhere. I had done some prayer work out in the desert that day, asking to find out what it meant to be a healer. Was this connected? Was this an omen or something else? Life seemed to be telling me something, grabbing me and shaking hard.

Not too long ago I wrote about a more recent, less deadly omen experience: The Victory of the Dove. There was a simple way to interpret that omen, but I have instead chosen to focus on the communication of power, the transformative energy in the omen itself. Focusing on that has brought me to ground in some important ways.

I could not put the Elk into a tiny box. Its life was much too great. The urge was still there, to find a simple meaning just about me. That kind of thinking seems to come with our modern way of life in just about everything we do.

There are times when life shakes you so hard you just stay shaken. Its supposed to be that way.

What if omens are really just moments in which we awaken to the reality that life is always talking to us? We finally join the conversation already in progress for billions of years. When we feel the power of the omen all we’re feeling is the overwhelming presence of the consciousness of the Earth. That presence is so awesome we can only take in a few tiny whispers, or risk becoming radicalized, spiritual outlaws in our own culture.

We risk leaving a part of ourselves behind on dark stretches of road besides great fallen beings. We risk returning there when we think about the weight of prayer.

Back when that Elk came into my life I was searching for meaning under every rock, in every bookstore, around any corner I might walk. Omens were mysterious signposts that seemed to lead somewhere and nowhere at the same time. Now the dialog has changed for me, I don’t look for signs or omens any more. I have been fed enough by life that I’m more interested in accepting responsibility for my part of the conversation. I’m learning that listening and really receiving whats given, hopefully with gratitude, is most of what my work is. When I do that, I hear the conversation more clearly. I’m able to begin to learn the language, the etiquette of participation.

The grace of some things, like prayer, have come at a great price.

The crushing presence of that Elk Heart is a part of me. Shocking though it was I’m glad I ran back there to at least witness what happened. I can still hear the sounds of the trucks, see the wetness of the heart in their oncoming lights. I can close my eyes and find my way back there instantly. Regardless of whether or not some cosmic force directed me to that moment, his heart has become a part of my life, my spirit, my way of being in the world.

When I visit the spirit of that Elk, through journeying, his message to me is clear and joyful:
“Don’t be afraid. Dance, sing. Don’t let the gravity of life and its pains stop you from dancing.”