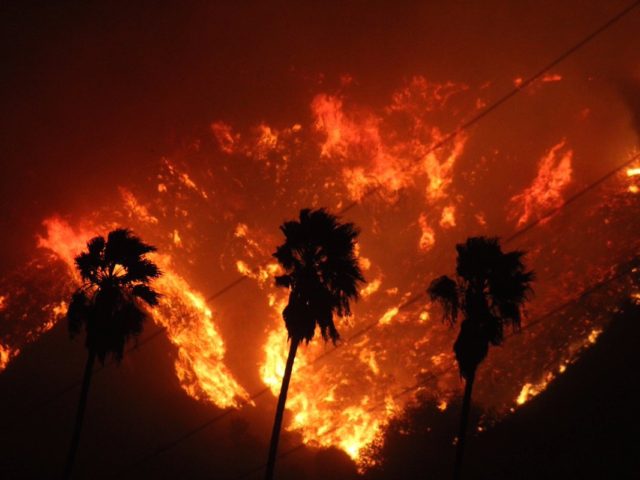 Its 9:40 pm and I’m sitting outside in shorts, typing on my laptop as fire trucks scream out of the station up the street and helicopters pass low overhead. I feel cool for the second time today. The other time I was in the Pacific ocean.

Sometime this afternoon five fires were started about fifteen minutes south of here. Though one thinks immediately of arson, the news says its was only a car backfiring. That is how dry it is here – drive down the freeway and you start a fire without even noticing. This is the third fire in thirty days for Santa Cruz county. Today is the first day of Solstice, only the beginning of California’s fire season.

This one is being called the Trabing fire. At least a dozen homes have already been lost. The Davenport fire about twenty miles north is not yet contained. The Indians fire, a giant forest fire about forty miles south in a neighboring county, is about 50% contained. Thankfully the first fire to hit our hills – the Summit fire – is out. I remember how shocked I was a few weeks ago to hear the highway into Santa Cruz was closed because of it.

The temperature hit 101° by noon – about twelve degrees hotter than you would expect for Santa Cruz at this time of year. As I walked back from the cafe where I spent the day working, I saw the plume of smoke from the fire. It looked like someone had bombed the hillside with enough explosives to take out a twenty square mile area. It looked close.

My wife and our baby boy spent the rest of the afternoon trying to stay cool at the ocean. Thankfully the water was still in the mid 50’s – the waves at Mitchel’s Cove were epic. Not usually a spot for surfing with anything bigger than a boogie board – we saw waves hitting well over ten feet.

Beyond the surf at Lighthouse Beach the Trabing fire grew. Just up on the cliffs a wedding ceremony kicked off with the smoke and fire providing an apocalyptic back drop. Later the bride and groom made their way to the beach for some photos. She was very reluctant in heals and a pristine white wedding dress. The groom giddy with the moment dragged her down the mossy wet cracked stairs. Posing for a photo they almost got hit by the monster waves. We wed as California burns. Strange days.

Our apartment was too hot to spend more than a half hour in until about 9pm. I said goodnight to the wife and boy. My senses are too wound up to sleep.

There is one phrase that echoes across all of the news coverage of these fires. You hear it more than the praise of our heroic firefighters – who are kicking butt. You hear it even more than the stories of neighbors staying behind to help neighbors, and there are many stories about that. It was a phrase that caught my ear because it was new to me: “livestock evacuation”.

The hills are full of horses, pigs, cows, sheep, goats, chickens and those who care for them. Even before a relief shelter was set up for the human evacuees of the Summit fire the fairgrounds opened up and volunteers erected livestock shelters. They didn’t have to put the word out, people knew it would be needed and just started showing up. In every fire report I saw the livestock evacuation information was posted at the bottom of the screen. Not only are the hills filled with animals, they’re filled with people who love and respect them.

As I watched news of the Trabing fire one of the newscasters was evacuating her own home, a home her family had lived in for a hundred years. Her father stayed behind. She said because “that’s just who he is.” They were able to get the horses out in time. There are probably a lot of country folk who understand the choices they made.

Next I saw a clip of a man helping his neighbors with their livestock. He’d never touched a horse in his life. Today he calmly lead three past a blaze that could only have been a breath away. People thought first of their most vulnerable family and community members, often they walked on four legs.

Every day I live and work with gentle unsung heroes. They don’t all go off to fight wars or serve on the front lines of our communities as first responders. I’ve gotten to see a lot of them over the last month. It makes me proud to live here, even as California burns.