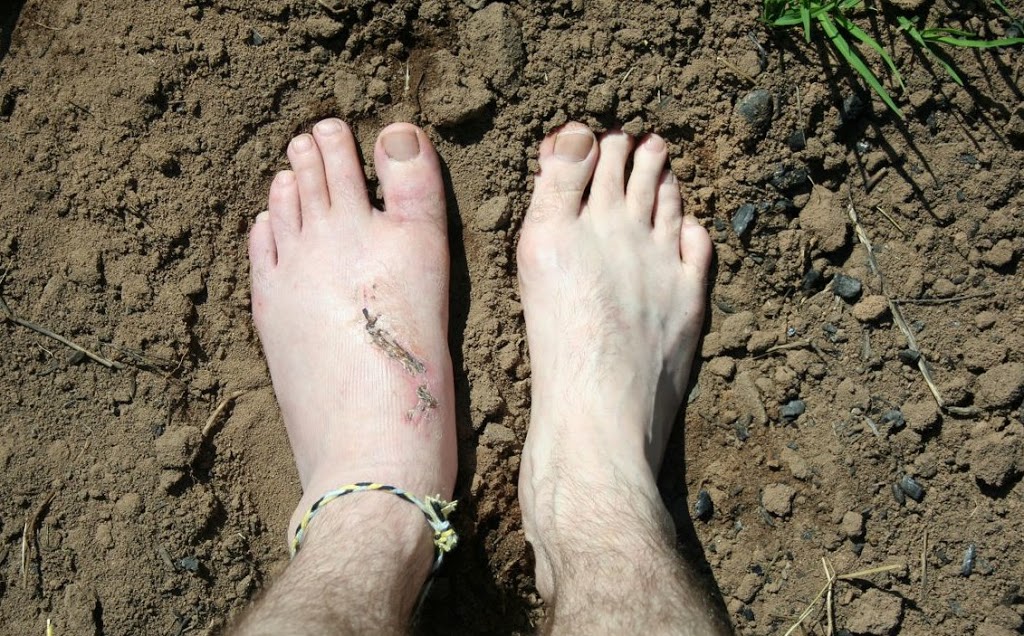 They’re called wake-up calls. When nothing else will bump us out of the groove we’re stuck in, life delivers something that will. In my case a newly sharpened chainsaw served as the messenger. Some of you may be considering halting reading this post right now, perhaps even unsubscribing. Let me assure you as I write this I have all fingers and toes properly in place, and I’ve left the bloody details to cautionary tales I’ll tell my son when he asks why I won’t let him use the chainsaw.

It was a close call. Close enough to sever a tendon on the top of my left foot. End of the day, hot and sweaty, I could have laid aside the fire wood the first time it slipped. Instead I reasserted my foot and laid Chuck (yes I have named my chainsaw) into an arm size piece of dense wood.

Hours of mayhem later a skilled surgeon repaired the tendon and sewed my flesh together. It will take longer to unwind the shock my wife and son endured as they rushed me to the emergency room. This weekend we were to enjoy Mothers Day with Grandma in Utah. Instead they helped Papa manage a bulging bandaged swollen foot.

I’ve come to realize that events like this don’t just have one deeper meaning. They are a turn on the road to a new forest, a new way of experiencing the world. Not just the hopping part is new – that I expected.

There is the obvious stuff: be more present, don’t rush things, don’t get on a mental treadmill. Days before the chainsaw event I attended a FSS workshop that enabled me to do a lot of shamanic journeying. On almost every journey the spirits (including my Father!) kept saying “Slow Down.” It was becomming comical in its regularity. Not so funny now. I was actually mindful for several days after that, until the trip loomed on the horizon. Now I realize something more than “being mindful” was being asked of me.

River. That deeper message surfaced a few days into healing. Its a word that has special meaning for me, ever since a forest initiation I went through five or more years ago. It is a signpost to a way deeper into the woods, closer to the sacredness of all things.

I always want change to meet me first, and then patiently give me time to re-orient to a new way of doing things. I forget that I usually need to forge a new direction on my own, then wait for change to catch up and hope it doesn’t crash into me when it arrives. Paths are made by walking forward, not by waiting around for magic buses to show up. Thanks Colleen : ) .

Its been too easy to step away from the sacred currents of my life. I get caught up in obligations, in work, in chainsaws. These distractions all have their own way of biting back. They all extract their own ounce of flesh I’ve lost touch with the currents I discovered in the forest years ago. They were unbridled in a way that I needed them to be, in a way I need to be. An ungroomed path holds the greatest value for me, though I easily forget that truth. River embodies potential, a way to be modern and ancient, to be spiritually present and emotionally available. A way to be more me. Once that gateway has been opened, its best to stay attentive, to follow its twists and turns. Otherwise you might get a gentle bump, or perhaps something a little rougher.

My wife Terry is still shaken. Today at breakfast she looked across the table at me and said, “I had the realization last night that our lives had changed.” She didn’t have specifics, neither do I, but I know she’s right. Things have changed, and they needed to change. It was time.

It looks like I’ll have plenty of time to contemplate the meaning of River and this shift in our lives. Tendons take time to heal, and I can only hop so far down any path. I suppose I should thank Chuck for the wake up call. It easily could have been worse. Lots more tendons, bones and arteries could have been destroyed. As a matter of fact I think I’ll journey to his spirit and ask him for insight today. I bet he’s got a lot more wisdom than I give him credit for.

Be well, be safe, go slow, find the Rivers edge.